Due to a conscientious facilities manager, Preus was granted access to materials that were bound for the landfill, and negotiated a deal with the moving company contracted to clear out the schools. Six semi loads of wobbly chairs, marked-up desks, and gum-laden bookshelves were packed into a donated vacant store front in Jackson Park, and became the primary material source for his work as an artist and contractor.

The participating artists have produced a rich assortment of objects, installations, instruments, utensils, and functional prototypes, to be initially exhibited at Open House Contemporary, a 3-unit, 4200 sq. ft. art venue and luxury vacation rental in the River West neighborhood.

The exhibition was listed by Lori Waxman in her best of 2017 roundup. Other reviews include the New Art Examiner, Bauwelt, a German architecture and design magazine, and a verbal review on the art podcast Opposable Thumbs. 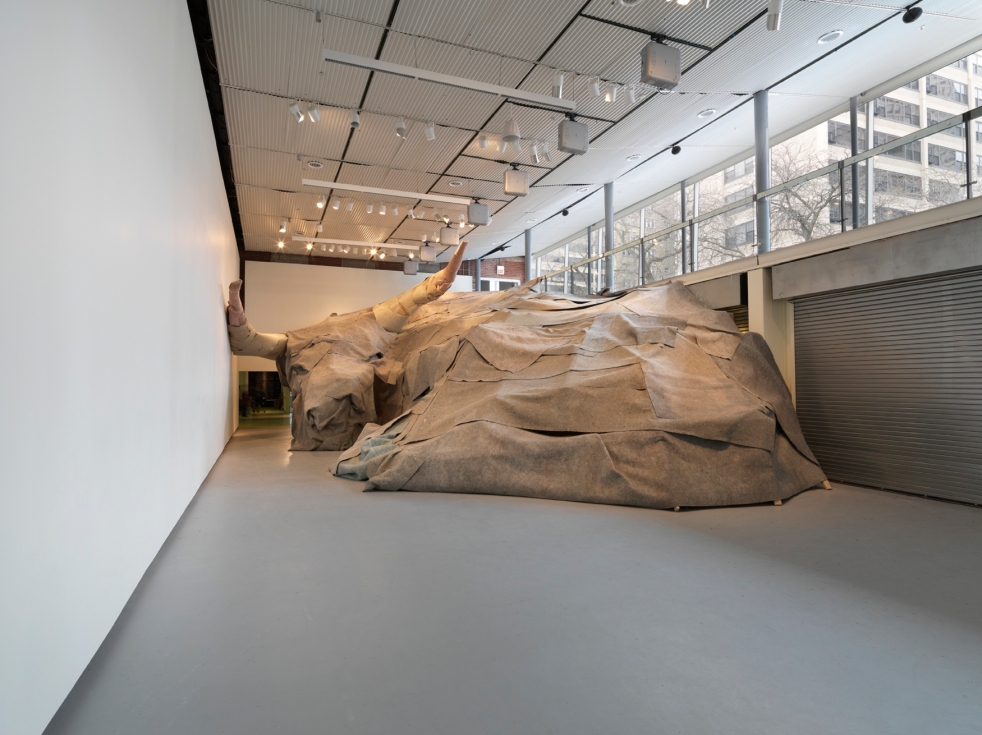 from Chicago Tribune review by art critic Lori Waxman:
“In the main gallery of the Hyde Park Art Center, John Preus has constructed a gargantuan bull out of castoff furniture, hundreds of old carpets and nearly a thousand two-by-fours. The creature is large enough that its belly doubles as an event space, its neck functions as an art gallery, and its hump serves as a meeting room, atop a spinal column of stairs. A slit in the animal’s throat provides an entryway.
“The Beast” is a miraculous feat of carpentry, imagination and recycling. It’s a bold exercise in spiritual and structural faith. It’s an inspired summoning of metaphors and contradictions…”
“…So it is with Preus’s “The Beast,” a formidable creature if ever there was one — except that the poor thing seems to be taking shelter in the Art Center, curled up in a corner of the gallery, nursing invisible wounds. His pelt is dull, his horns bandaged, his eyes heavy with exhaustion and suspicion.”
“What ails him? Well, there’s the collapse of the financial markets. (He’s a bull, after all. His wee bronze cousin of Wall Street continues to charge along, as bull-headed as ever.) There’s the closing of dozens of Chicago public schools in predominantly African-American and Latino neighborhoods on the south and west sides of the city. (Six semi-loads of materials from shuttered CPS buildings were routed to Preus’s studio instead of the landfill.) There’s the general dearth of truly public places in North America, land of exurbs and highways. (The belly of “The Beast” has become not just a site for a thoughtful mix of programming but for potlucks, lectures and conferences that attend to the topic of public space itself.) There’s surely more, too, given the complex politics, economics and morals that have contributed to the above situations.”
“But here’s the extraordinary, marvelous contradiction of it. Despite these burdens, “The Beast” pulses with life and spirit from within. Graffiti-scarred tables become soaring walls. A pair of scrappy metal school desks and chairs finds carefree life as a swing built for two. Leftover bits of wood puzzle their way into neat cubes that serve as handy stools, end tables or whatever else is needed. Worn and stained leather upholstery, strung and stretched from ad-hoc frames, hang like pelts hunted in the new wilderness, waiting for their calling. Even junk mail vibrates afresh, covered in psychedelic doodles and theoretical scribbles.”
Basis of receipt of Efroymson Fellowship- $25,000, Maker Grant-$3,000. Listed among best Chicago exhibitions of 2014 by the Chicago Tribune.

Collection of objects made for/with Theaster Gates. 2009-2012. from top left: 12 Ballads for Huguenot House-documenta 13, Kassel Germany.  DJ Booth for The Listening Room, here exhibited at the Seattle Museum of Contemporary Art.  Bathroom of The Archive House, part of the Dorchester Projects.  An Epitaph for Civil Rights at Kavi Gupta gallery, here pictured on the cover of Art in America which displays a piece designed and fabricated by Preus. Stairway in The Rebuild Foundation house in St. Louis, MO. Mississippi Pavillion, designed and fabricated by Preus, here shown at the Renwick Museum. Preus has been mentioned in articles on Gates in The New Yorker, and numerous art publications.

Pictured here are a handful of the many objects and spaces that Preus designed/built and collaborated on with celebrity artist, Theaster Gates. The image is controversial being that Preus made everything pictured but has no authorial claim to the objects. The image is included precisely because it problematizes the authorial condition of the current market establishment in a sector of the art world. It offers an oblique challenge to that world and argues that the current methodology of attribution is incomplete, inaccurate, and less interesting than it could be. Art historian Glenn Adamson said in an interview: “I am always struck by contemporary art’s dysfunctional relationship with its own forms of production. My guess is that historians in fifty years will look back at our moment and prioritize the systems of making prevalent in the art world, not the content or imagery or ideas… There isn’t an honest conversation about this at the moment.”   http://www.pcah.us/blog/entry/pigeons-on-the-grass-alas-glenn-adamson/

Preus’s work will continue to complicate and explore alternative narratives and authorship arrangements, not to spite Gates, but to enrich the possible forms of collaboration and attribution, and to strengthen the heterogenous possibilities of art practice. Preus is working on a book with a section dedicated to a critique of Gates, and the realm of Social Practice art.

Prussian Blue 4 (20″ x 30″)
Altered blueprint from closed Chicago Public Schools, framed with school materials. 2016
Found and spent blueprints no longer serving as directives for the schools for which they were produced, become free signifiers, affected by the pathos of their history. The title suggests that they might offer guidance in future educational and structural developments.  Private collection.

In 2015 Preus and his wife of 20 years separated. The piece pictured here is a detail of the kitchen that Preus constructed for his wife to create 2 living spaces in their shared 2-story condominium in Chicago, and as a part of his ongoing study of grief, trauma, and loss and its relationship to physicality and material.  The wall separating their bedroom from their daughters was removed to make space for the kitchen, and the interior lathe from the wall was used to create the pictured installation, which also houses a set of light fixtures. The kitchen was made entirely from found cabinets and appliances, donated by an ex-girlfriend. Unlike the work made from school furniture, these materials are saturated with a much more personal and visceral sense of loss.

3D Rendering of The Scapegoat Chapel for Sex and Drugs

Concept sketch for an outdoor installation imagined as a functional male/female/trans brothel, and center for experimental and ritual drug use.  Based on the premise, as argued by Christopher Ryan, Thaddeus Russell, Laura Kipnis, and many others, that a great deal of local violence and crime in American culture is based on current policies surrounding sex and drug use, the “chapel” proposes adopting the successful Portuguese practice of de-criminalizing all drugs, and raising the puritanical prohibitions on consensual exchange of money and sex, as a campaign to combat violence and empty the prisons.

The form is based on the Old Testament story of Abraham and Isaac in which god provides a goat trapped in a thicket as a substitute, at the moment prior to Isaac’s sacrifice. It is a story that has been imagined by atheists as testament to god’s cruelty, while for the faithful it stands as the test case for devotion. In Preus’s language, following Freud, a great deal of morality, psychological trauma, relational dysfunction, violence… is based on a kind of substitution, or projection, or in Rene Girard’s language, scapegoating. Preus suggests that those in prison for drug and sex offenses become a sort of modern day caste of puritanical scapegoats, untouchables, designed to reinforce the current moral order. Preus continues his research into the legality of sex work, and its relationship to social violence. 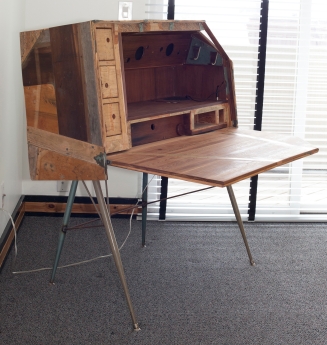