Social Furniture came into being as part of a broader conversation with the players listed above.  The development had approached Jamie in light of his many years as an advocate for, and independent journalist reporting about public housing residents at Henry Horner Homes, and Stateway Gardens. They expressed interest in exploring in the Lathrop context a set of themes (often with reference to the Experimental Station) about the importance of leading redevelopment with programming that engenders resident engagement rather than treating it as an afterthought.  In negotiating a working relationship with LCP, Jamie was concerned to avoid any appearance of a conflict of interest and didn’t feel he could be directly employed as a consultant by LCP.  His solution was to develop a proposal to host and moderate a series of four dinner conversations at the Experimental Station to bring the development team together with artists and grassroots entrepreneurs who might help them envision and develop programming strategies.  Concurrently, John Preus was granted access to what turned out to be 6 semi loads of public school furniture. 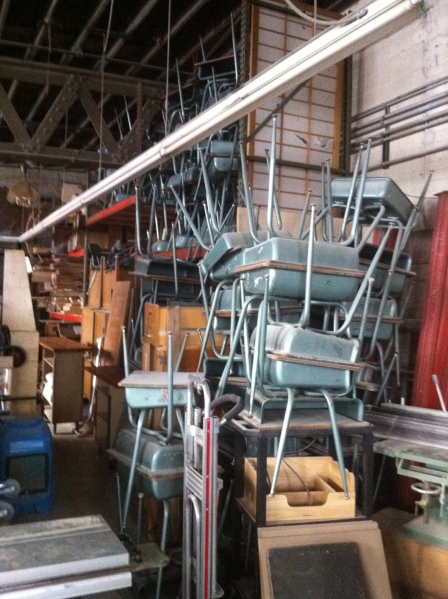 Jamie and John developed a plan for a program at Lathrop: we would establish a wood shop, providing training and employment for residents in repurposing the furniture and offering it for sale. We saw this as the beachhead for arts-based programming at Lathrop. Also, importantly, this shop would be the site of ongoing discourse about resource recovery, preservation, and strategies for housing the poor. LCP was enthusiastic about the idea, and we entered into protracted negotiations with the CHA in an effort to secure space at Lathrop for storage of the CPS furniture. Ultimately, those negotiations derailed. So we ended up taking six semi loads of CPS furniture and storing them in several warehouses on the South Side at our own expense. The CPS furniture became a central element in John’s vision of The Beast, his exhibition at the Hyde Park Art Center during the spring and summer of 2014.

Unable for the time being to access space at Lathrop, we developed a plan to advance the Lathrop process by way of The Beast. This included developing design and production strategies for repurposing the furniture and various programming occasions, including an all-day workshop at Lathrop at which architects and designers, Iker Gil and Quilian Riano engaged with residents.

Blocked for the moment from establishing a program space on site, we developed another strategy. The idea emerged from the second dinner conversation: throughout the fall, John and Jamie went to Lathrop on Tuesday afternoons, wandered the site, and talked with residents, building relationships and exploring possible design interventions that would create amenities and improve the living conditions for those who remain on site. We called this process Conversation Pieces. It has proved productive. We have emerged with a plan to develop a mobile shop in a used ice cream truck that LCP has purchased for the purpose. We are currently building out the truck as shop space, and will begin deploying it to Lathrop on a regular basis in the new year. Beyond the seed funding provided by LCP, we are actively fund-raising for this project. We were finalists in the Creative Capital award competition but, alas, were not chosen. And we are in conversation with several foundations about possible support.

A link to some conversations in the Beast with Jamie.  Password: lathrop

About Lathrop (taken from Wikipedia)

Julia C. Lathrop Homes is a Chicago Housing Authority (CHA) public housing project located on the Near North-west side of Chicago, Illinois, bordered by the neighborhoods of Bucktown and Roscoe Village. It was one of the first Chicago public housing projects, being completed in 1938 by the Public Works Administration. It was placed on the National Register of Historic Places in 2012 and is currently undergoing restoration. Julia C. Lathrop Homes consists of two-story brick row houses and three- and four-story apartment buildings separated by landscaped courtyards and linked by small archways in a campus-like arrangement. There are a total of 925 units on 35.5 acres of land (approximately three and a half square blocks).

Named for social reformer Julia C. Lathrop, Julia C. Lathrop Homes was one of the city’s first public housing projects, built by the Public Works Administration in 1938 and initially leased to the Chicago Housing Authority.  The buildings were designed in a Prairie School, Arts and Crafts style with details in a range of styles from Art Moderne to Colonial Revival.  The designers were a “dream team” led by Robert S. De Golyer and also including Hugh M.G. Garden,Thomas E. Tallmadge, Vernon Watson, E.E. Roberts, Charles White and Hubert Burnham, with landscaping by Jens Jensen.  In 1959, the authority added an 8-story building to house seniors to the south side of the project.

In keeping with the federal neighborhood segregation policy of the time, the development was intended for whites only.[4] As the development matured, it became racially integrated,[3][8] and has been called “the city’s most diverse public housing neighborhood”.[9] In recent decades, the Julia C. Lathrop homes have been subject to many of the same problems of increasing crime as other housing projects in Chicago, including narcotics trafficking and gang activity.[10][11]

In July 2006, the Chicago Housing Authority announced its intention to demolish the Lathrop Homes and redevelop the site.[3][6] Residents and preservationists protested and Landmarks Illinois developed a plan to renovate the complex as affordable “green” housing.[2][8][12][13][14][15][16][17] In early 2011, the authority cleared residents from the north end of the development;[18][19] in November 2011, it awarded the redevelopment contract for the site to a team with experience in architectural preservation and sustainability.[5] In October 2012, the Chicago Housing Authority approved the demolition of 1800 units including some from Lathrop Homes; however, how many of those demolitions relate to Lathrop Homes and when demolition would begin was not announced.[20]