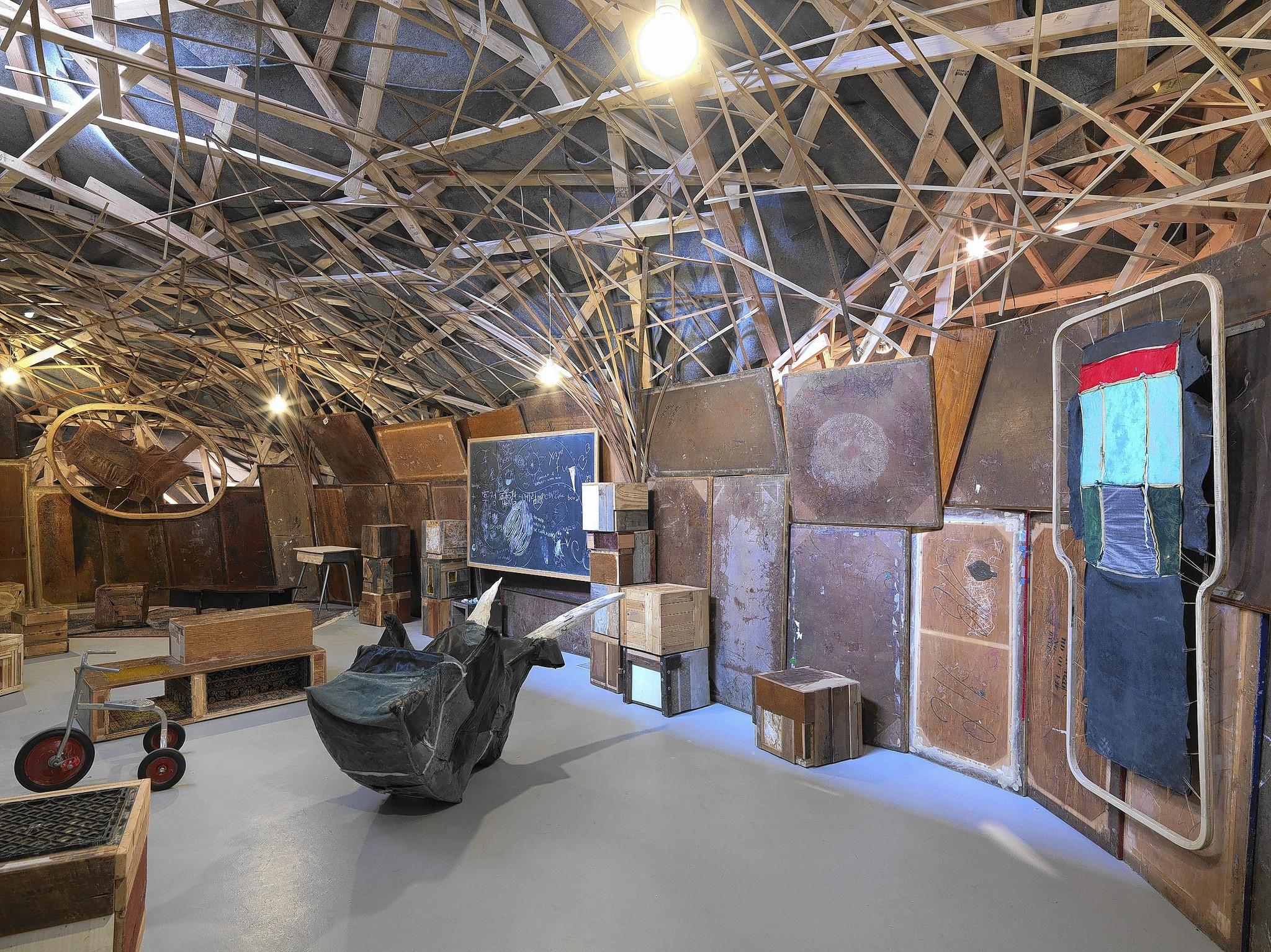 In the main gallery of the Hyde Park Art Center, John Preus has constructed a gargantuan bull out of castoff furniture, hundreds of old carpets and nearly a thousand two-by-fours. The creature is large enough that its belly doubles as an event space, its neck functions as an art gallery, and its hump serves as a meeting room, atop a spinal column of stairs. A slit in the animal’s throat provides an entryway.

“The Beast” is a miraculous feat of carpentry, imagination and recycling. It’s a bold exercise in spiritual and structural faith. It’s an inspired summoning of metaphors and contradictions.

The first of those contradictions may be that building a giant walk-in beast sounds like a terrible idea but turns out to be a brilliant one. Inhabitable figurative sculptures are rare in the history of art — Nikki de Saint Phalle’s enormous, reclining woman of 1966, whose interior rooms could be entered from between her legs, and the Statue of Liberty, accessed more discreetly, are two of the few. What these monuments lacked in subtlety they gained in potency — one as a symbol for feminism and fertility, the other for democracy and freedom — all the more so because of the bodily experience of being inside them.

So it is with Preus’s “The Beast,” a formidable creature if ever there was one — except that the poor thing seems to be taking shelter in the Art Center, curled up in a corner of the gallery, nursing invisible wounds. His pelt is dull, his horns bandaged, his eyes heavy with exhaustion and suspicion.

What ails him? Well, there’s the collapse of the financial markets. (He’s a bull, after all. His wee bronze cousin of Wall Street continues to charge along, as bull-headed as ever.) There’s the closing of dozens of Chicago public schools in predominantly African-American and Latino neighborhoods on the south and west sides of the city. (Six semi-loads of materials from shuttered CPS buildings were routed to Preus’s studio instead of the landfill.) There’s the general dearth of truly public places in North America, land of exurbs and highways. (The belly of “The Beast” has become not just a site for a thoughtful mix of programming but for potlucks, lectures and conferences that attend to the topic of public space itself.) There’s surely more, too, given the complex politics, economics and morals that have contributed to the above situations.

But here’s the extraordinary, marvelous contradiction of it. Despite these burdens, “The Beast” pulses with life and spirit from within. Graffiti-scarred tables become soaring walls. A pair of scrappy metal school desks and chairs finds carefree life as a swing built for two. Leftover bits of wood puzzle their way into neat cubes that serve as handy stools, end tables or whatever else is needed. Worn and stained leather upholstery, strung and stretched from ad-hoc frames, hang like pelts hunted in the new wilderness, waiting for their calling. Even junk mail vibrates afresh, covered in psychedelic doodles and theoretical scribbles.

The principle of reuse is hard at work here, finding redemption for “The Beast” and his many ills by refusing to waste resources. Be they surplus materials, underutilized human energy or potential community space, here they are reinvented and reinvigorated, though always with traces of their history intact. Things have lives too, and here they retain them, lending “The Beast” decades of experience, perhaps even some ghosts, even though he is technically just a few months old.

The artist and his assistants built the improvised, intricate colossus in the gallery over the course of ten days, and no one repurposes wood like Preus. Trained as both a furniture maker and a conceptual artist, Preus has over the past decade collaborated on a number of influential cultural experiments in Chicago. With Theaster Gates he redesigned and built out many of the homes that make up the famed Dorchester Projects on the South Side. At the Southside Hub of Production (SHoP), curator Laura Shaeffer, Preus and many others turned a scruffy Hyde Park mansion into a funky multigenerational museum and community space. Under the name Material Exchange, he and artist Sara Black roamed around making playful use of remains, from a retired fishing boat to Astroturf leftovers from an installation by the German artist Martin Kippenberger. “The Beast” takes the hide of Dorchester, the guts of SHoP and the heart of Material Exchange, and grows from it a single, massive animal that is entirely Preus’ own.

The effort has been enormous. It is also naturally ecological and inherently optimistic. To make a new world out of scraps of the old conserves limited primary substances, and it must do so out of a profound belief in the possibility of creating a better world through conscientious doing and making. Otherwise why bother?

Indeed, that’s one way to understand the ancient phrase “in the belly of the beast” — as apt a description of being inside Preus’s sculpture as any. Though it can simply indicate a facility where work is being carried out, in practice the expression cuts deeper. Che Guevara used it to refer to Americans living in the United States. Jack Henry Abbott used it to title his letters from prison. It means creating change from within an opposed organization.

Its earliest origins are biblical, however, from the Old Testament story of Jonah and the whale. The whale, or great beast, swallows Jonah whole after he is thrown overboard to calm a raging storm. Ultimately it saves him from drowning and he learns about trust and salvation.

At the Hyde Park Art Center, Preus has collapsed all of these senses together. “The Beast” harnesses dying American ideals from within which participants can meet, plan, swing, listen, debate, mend, eat, meditate, commune and daydream their way to a better place. It may sound like a whole lot of horribly mixed metaphors, but trust in Preus: it’s glorious.

Lori Waxman is a special contributor to the Tribune, and an instructor at School of the Art Institute.